A little Nudge can go a long way

Ever needed motivation to move things forward? We take a close look at how one simple economic theory can have a huge effect on individuals and entire populations. 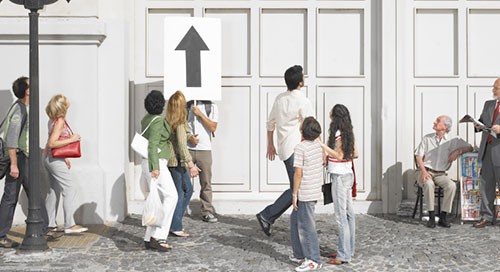 Behavioural economics, or “nudge theory”, has been around in some form since the late 1970s, but it entered the lexicon in a serious way earlier this year when one of its pioneers – Richard Thaler of the University of Chicago – won the 2017 Nobel Prize in Economics.

Underpinning the concept is the notion that people don’t make rational choices, and that subtle prompts can “nudge” them towards better decision making.

And it’s not just about financial decision-making; nudge theory has been used to boost organ donation, help turn kids off junk food, ward off antibiotic-resistant superbugs and clean up public toilets at airports.

The head of Behavioural Economics Queensland University of Technology, Professor Lionel Page, says choice architecture – how choices are presented – can influence behaviour for the better.

“The idea is to help, not by forcing people, but by creating a situation where people are more likely to make some choices rather than others”
- Professor Lionel Page

Governments around the world deploy behavioural economics in everyday policymaking to steer people towards making decisions that are not only in their best interests, but also have a broader civic benefit.

In the UK, an “opt-out” approach to organ donation triggered a spike in donor registrations – that is, when asked about organ donation, individuals have to actively answer in the negative rather than the positive, which was the default. And, at schools in the United States, putting healthy food at eye level at the start of the cafeteria line reduced consumption of junk food.

Closer to home, the federal government’s Behavioural Economics Team is trialling ways nudge theory may reduce the number of unnecessary antibiotics prescribed by GPs in a bid to combat drug-resistant superbugs.

An initiative in New South Wales informed doctors they prescribed more antibiotics than 80 per cent of their peers, reducing the number of unnecessary prescriptions by 3.3 per cent.

A similar initiative in the UK – benchmarking GPs’ prescription rates against their peers – has found great success.

“These ideas are going to be the natural toolbox of [policy] practitioners,” Page says. “I don’t think it’s going to be the panacea, but it’s another tool, and the big advantage of it is you can have an effect with little intervention and little cost.”

Cynics argue that nudge theory has been hijacked by marketers for commercial gain: beware the TV subscription service that automatically plays the next episode so you’re hooked on a series before you know it, or the gambling site that advertises bets with long odds.

Page counters that marketers have long used psychology to sell products and the growing uptake of nudge theory in the public sector levels the playing field.

“It’s not like we live in a world where informed customers are making informed and rational, enlightened choices about what’s good for them – they’re already living in a world where private companies use psychology to get the best out of people’s weaknesses,” he says. “We need the nudge to help us design choice architecture in a way that is good for the consumer.”