Could we cure incurable diseases? Sure. Stop the spread of malaria? Quite possibly. Protect food crops from disease and environmental stress? Yes; yes we could. Resurrect an extinct species? Well, maybe but… should we?

Revolutionary gene technology known as CRISPR-Cas9 promises all kinds of wonderful upsides, but there are the implications of the so-called “scissors and glue for DNA” technology? 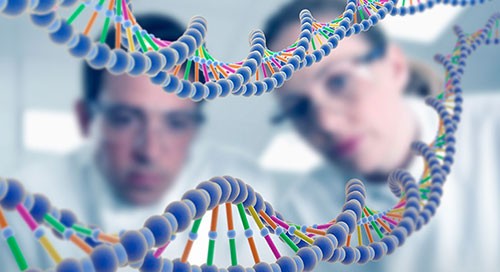 CRISPR, pronounced “crisper”, is a technique that uses an enzyme (Cas-9 ) as molecular-level scissors, cutting strands of DNA to remove or modify a very specific sequence of genes.

Dr Charles Robin, a senior lecturer in biosciences at the University of Melbourne says advances in genome sequencing technology over the past 10 years have enabled scientists to “read DNA” for some time thanks. But this new technology lifts the possibilities to a whole other level.

“CRISPR now allows us to edit [DNA],” Dr Robin says. “It’s fantastic for any person doing gene modification. It will help us discover the function of genes, which will have a huge impact on biology generally.”

“The risks associated with modifying an organism that’s already in our ecology are quite high.”
-Dr Charles Robin

In the medical sphere, CRISPR could be used to more effectively isolate and target cancerous, HIV or Parkinson's cells and, less commonly, to stop bad genetic diseases being passed onto children.

“I think the most useful things will be in agriculture and some therapeutics to do with blood – things you can transplant – and immunotherapy, such as for cancer patients,” Professor Crossley says. “You’re not going to get modifications of brain and bone.”

We can expect CRISPR to be applied extensively to agriculture, preventing disease and environmental stress in crops – effectively allowing seasonal plants to grow at any time of the year. It might also be used to enhance food. One company in Korea is using CRISPR to make tastier, more alcoholic beer.

Dr Robin’s research interest is the use of CRISPR to engineer “gene drives” in pests – forcing a genetic trait through a population to alter its potency or eradicate it entirely.

“It could be used to stop insects vectoring human disease, essentially sterilising female mosquitos to stop the transmission of malaria to humans,” he says. “There is also huge potential to stop biosecurity threats, such as eradicating tomato-potato psyllid (TPP), which arrived in Western Australia last year.”

(TPP is a small, sap-sucking exotic pest that attacks crops such as tomato, eggplant, capsicum, chilli, tamarillo and sweet potato.)

Potential environmental impacts weigh heavily on the “bad” side

Dr Robin says “all sorts of ecological modelling needs to be done” to safeguard against unintended impacts on the ecology. Getting rid of rabbits sounds like a great idea, but should we do it?

“If we get rid of rabbits, that will have huge ecological consequences for foxes, cats and native animals for example,” Dr Robin says. “The risks associated with modifying an organism that’s already in our ecology are quite high.”

The risk that CRISPR could one day be used to cross-breed species, rebirth extinct animals a la Jurassic Park or even genetically modify entire human populations is a genuine concern. In April 2015, a team of Chinese researchers published a paper outlining the use of CRISPR technology on unviable human embryos. The stakes are high in what is expected to become a trillion dollar industry.

Like climate change, CRISPR technology has the ability to impact our global ecology beyond borders, so we’re as strong as our weakest link. With this in mind a group of US scientists, led by the CRISPR co-developer Jennifer Doudna from the University of California, Berkeley, published a letter in the journal Science to encourage an international meeting to consider the technology’s social and ethical implications.

The intention was to “do this now before the technology is applied in ways which people might feel very uncomfortable about,” says Doudna.

But Prof Crossley says we shouldn’t worry about destroying the world just yet and that CRISPR is largely a force for good. “The technique is new,” he says, “but we already have a good legislative and ethical framework in place.”