The economic of sleep

that was fun; Christmas with the family, New Year’s on the town and food and festivities in between. Chances are you might be starting off 2017 with a bit of holiday-induced sleep debt.

Even if you spent most of the holidays getting your required 7-9 hours of sleep, just one late night – a New Year’s Eve party, perhaps – could impact your performance for as long as a week. 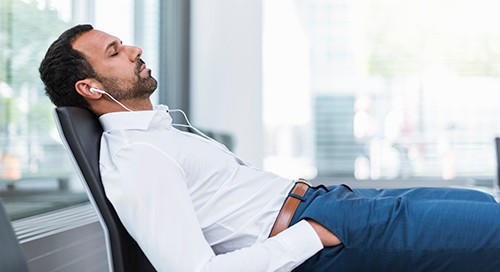 Many of us will be plagued by sleeplessness for much longer; in fact more than a fifth of Australian adults suffer chronically poor sleep. And while the personal cost of that sleeplessness is high, the impact on our economy is near-catastrophic.

The Sleep Health Foundation estimates that sleep disorders – in the form of insomnia, sleep apnoea and restless legs – cost the Australian economy more than $5.1 billion a year in lost productivity and health-care costs.

The reduction in our quality of life costs the country another $31 billion annually.

And we’re not alone. In a cross-country analysis of the causes and consequences of sleeplessness the Rand Corporation’s research arm found that lack of sleep among America’s working population costs the US economy up to $411 billion a year – or about 2.2 per cent of the American GDP – as well as 1.2 million lost working days.

Marco Hafner, lead author of the report Why Sleep Matters – The Economic Costs of Insufficient Sleep, says sleep deprivation affects individual health and wellbeing, leads to increased mortality risk among workers and has a significant impact on productivity levels.

Hafner says improving sleeping habits and duration could have huge implications for the economy.

“Insufficient sleep among its populations cost the five OECD countries under consideration up to $680 billion of economic output lost every year, with costs rising over time,” the report says. “Sleep deficiency adversely affects individuals, is costly for employers [and] is associated with large economic losses.

According to the Sleep Health Foundation, workers with a sleep disorder have a 50 per cent increased risk of occupational injury, absenteeism and error or safety violation attributed to fatigue; almost 10,000 serious workplace injuries are caused by poor alertness each year.

“Productivity requires people to be on the ball at work so they can problem solve, can make decisions quickly, can concentrate and attend to what they’re being told to do, or listen to other people,” Foundation chair Professor Dorothy Bruck says. “But they’re the sorts of things that are the first to suffer when you’re sleep deprived.”

So why aren’t we sleeping, and how can we sleep better?

Dial back on devices

Failing to wind down before bed is one of the top 10 reasons people have trouble sleeping.

Smartphones and tablets are often the tools of procrastination – light emitted by electronic devices has been found to suppress melatonin, a sleep-inducing hormone. This is why the Sleep Health Foundation recommends a gadget-free wind-down time of between one and two hours before sleep.

Then there’s our failure to prioritise sleep. Many people think they can get by on less, forgetting how much their brain and body count on it to recharge for the next day.

Other common factors preventing sleep include stress, side-effects of medications, medical conditions, eating and drinking late, jet lag, consuming too many stimulants such as alcohol or caffeine, and shift work.

How much is enough?

Bruck says eight hours is often considered the benchmark, but it depends on the individual.

“We say seven to nine hours is the normal range but it’s important to put a bit of thought into how much sleep you need,” she says. “You can sort of tell what you are when you think about how long you sleep on holidays when you’re allowed to sleep in – is that seven hours or nine hours?”

Feeling a surge of sleepiness after lunch is a sure sign of sleep deprivation.

Get in the rhythm

Bruck says developing good sleep habits can lead to a healthier, happier lifestyle and these can be established by following some simple steps.

-Try to go to bed and wake up at the same time every day to regulate your circadian rhythm – the physical, mental and behavioural changes that follow a cycle of roughly 24 hours, responding primarily to light and darkness.

-Set up your day with morning exercise or, alternatively, fit in an evening walk.
“Some people think sleep is like a tap and you just turn it on and off whenever you want to,” she says. “But that doesn’t work at all. If you want good quality sleep then it’s important to have it at a routine time.

“Walking is a bit ruminative and it’s good for helping go to sleep.”