A device developed by two Melbourne professors could improve outcomes for thousands of Australian stroke patients every year. And it joins an impressive cast of Australian inventions. 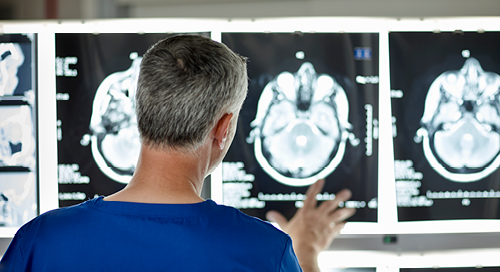 The new portable brain-imaging technology, designed to rapidly identify brain injury and strokes, could be a life-saving addition to road and air ambulances across Australia and the world.

Researchers have been awarded a $1 million grant from the Medical Research Future Fund Frontiers’ initiative, which supports cutting-edge research in Australian institutions.

A 30-strong team led by Professors Geoffrey Donnan and Stephen Davis at the University of Melbourne and the Royal Melbourne Hospital, aims to improve outcomes for people who experience a stroke – more than 56,000 a year in Australia alone.

Professor Donnan says diagnosis and treatment during the first hour after a stroke’s onset, known as the ‘golden hour’, can make all the difference to a patient’s chances of survival. That’s because for every minute after a stroke that treatment is delayed, up to 1.9 million brain cells die.

He says the technology will be particularly beneficial for regional and rural patients, who are 19% more likely to have a stroke and often have poorer outcomes. So scaling the equipment down to fit into both road and air ambulances is at the heart of the research mission.

“Your postcode should not determine your access to world-class stroke treatment,” Professor Donnan says. “We’re proposing a transformative research program with the aim to reduce mortality and narrow the urban, rural and indigenous healthcare gaps.”

The development is a reminder of just how many incredible innovations have emerged from Australian research over the past two centuries, ideas that have changed the world forever. We love to punch above our weight in the sporting arena, but when we think about Australia’s many great moments in science and engineering, we find we’re doing the same in these fields too.

From the first refrigerator in the 1850s to pacemakers, ultrasounds and the bionic ear, Australia has long been a leader in the world of science and technology research.

1854: Refrigeration - James Harrison patented his liquid- vapour compression system, which is still used to this day.

1943: Insect repellent - CSIRO’s Doug Waterhouse devised the chemical repellent to help troops in World War II before the formula was commercialised by Aerogard.

1961: Ultrasound - George Kossof and David Robinson devised the ultrasound scanner while working at the Department of Health.

1978: Cochlear implant - Professor Graeme Clark invented the bionic ear in 1970 at the University of Melbourne, but it took until 1978 to be fitted to the first patient.

1992: WiFi - CSIRO researcher John O’Sullivan first came up with the basis for WiFi in 1977 as part of black hole research.

2004: Stomach ulcer bacteria identified - Barry Marshall and Robin Warren proved bacteria and not stress was the cause of stomach ulcers, with Marshall drinking the bacteria to help prove his case.

2006: HPV vaccine - Ian Frazer and Jian Zhou developed the vaccine at the University of Queensland.