When Neil went into hospital to have a benign cyst removed from his liver his wife Sally and daughter never expected what came next. 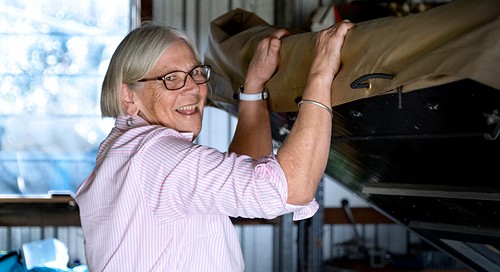 “Imagine the shock when we were told post op that he had an incurable cancer in his bile ducts and that nothing could be done except palliative care,” Sally says.

“Nothing prepares you for the changes that happen when a family member dies.”

When Neil got sick and received a payout from his employer, he and Sally went to a few financial advisers. They decided to go with Mercer “because we had such a good rapport with the adviser”.

“He was incredible and went way beyond what he was paid to do and the fact that everything was set up so well financially, meant not having to worry about how Hannah and I would manage,” Sally says. “I often wonder how I would have managed without that support.  Coping with the emotional side of life after a loved one’s death is enough to deal with.”

Neil’s passing and the fact that her mother died while Sally was still in high school were “two big things that have made me the person I am”.

“Those events hardened me in some ways, made me very self-reliant; I’ve learned to do things for myself and just get on,” Sally says. “I’m an organised person; a list writer, a planner, all those sorts of things. My mind is quite structured in terms of what I have to get done each day.”

Those traits held her in good stead throughout her career as an early childhood teacher in kindergartens and preschools – a job she “absolutely adored” – and continue to serve her well in retirement.

“I still write lists and I still have plans but I’m a lot more relaxed about things now; if someone invites me out for a coffee I just push things out to tomorrow’s to-do list and go have that coffee,” Sally says. “Having a list and a plan is really empowering though, it means I have things to look forward to and that’s what gets me up and going.

“If I didn’t have that I might just lie in bed and think, well what’s the point of getting up.”

A walk with her 14-year-old Maremma cross, Jessie is number one on the daily list. “Such a lovely, old soul, she’s what gets me out of bed – followed by golf, gardening and lunch with friends,” Sally says.

And travel is always high on her things-to-do; camping along the Murray River, three nights in Shanghai followed by a 20-day cruise back to Brisbane and a holiday in New Zealand with Hannah are all on the to-do or done lists for 2019.

“I’m always planning a trip somewhere; if I haven’t got a paid trip coming up I’ll put the camper on and just go,” she says. “I meet people who can’t picture themselves driving out of town but there is so much to do, just in this country. I traipse around the countryside in my camper and people are like ‘wow, imagine doing that’ but I can’t imagine not doing it.”

Checking in on money markets, or even her bank account, is definitely not on the daily list. That she leaves to her adviser Stephen Bury, who has been helping Sally for the past 15 years.

“Having faith in your financial adviser is huge; it makes me feel more secure and able to enjoy my life without worrying about money day to day. I have such confidence in Stephen that I can be quite relaxed about it.”