Friday 8 June is World Oceans Day and this year more than ever before, the day marks a call to arms to protect the seas from pollution and keep the planet blue. 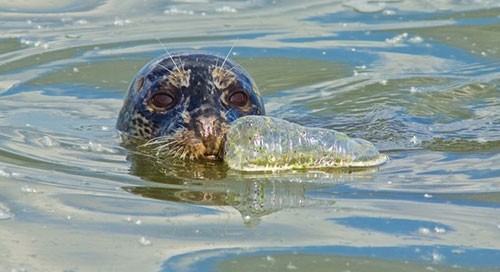 A rising tide of plastic kills millions of marine animals each year; and a mountain of the stuff is returning to supermarket shelves – not as packaging, but in the food we eat.

More than 5 trillion bits of plastic, weighing more than 250,000 tonnes, are estimated to be floating in the world’s oceans and some scientists now think this figure is a drastic underestimate.

And things are likely to get worse.

According to a 2017 World Economic Forum report, the ocean is expected to contain 1 tonne of plastic for every 3 tonnes of fish by 2025. By 2050, there’ll be more plastics than fish in the sea.

A gut full of plastic

The Ocean Cleanup foundation’s spokesperson Joost Dubois says plastic in our oceans has three key detrimental effects. The first is that ocean animals consume it; a problem brought to the world’s attention in dramatic style by photographer and filmmaker Chris Jordan and his images of dead albatrosses with stomachs full of plastic.

“It is directly endangering sea life through entanglement or ingestion of plastic,” Dubois says. “The animals feel like they have a full stomach, but plastic doesn’t provide any nutrition so it causes starvation.”

Ocean Conservancy research shows plastic has been found in 59% of sea birds, in 100% of sea turtle species, and more than 25% of fish in seafood markets around the world. National Geographic reports about 700 species of marine animals have been reported to have eaten or become entangled in plastic; by 2050 “virtually every seabird species on the planet will be eating plastic”.

Marine debris has an adverse effect in the commercial fishing, shipping and tourism industries. A 2016 United Nations report put the cost of pollution caused by marine debris at $US13 billion.

Some of the cost includes repairing vessel damage, clean-up, and decrease in tourism revenues due to polluted beaches.

There are also social impacts such as direct, short-term human health issues (injuries, entanglement and navigational hazards) and long-term impacts on quality of life.

Dubois says, “these plastics contain toxins, and after ingestion they can enter into the circulation of the animal”.

“That can lead to the accumulation of toxic substances down the food chain, and the end of the chain is where we are,” he says. “That’s a real public health risk.”

Vice-president of the Earth Day Network, Valeria Merino, says scientists are only beginning to measure the extent of microplastics – small pieces of material less than 5 millimeters in size in the world’s waterways.

“There are microplastics that we cannot see that are going to stay in the oceans for hundreds of years,” Merino says. “We think that about 80% of water has microplastics in it. They are so tiny that they are not against any regulations, even in our drinking water.”

Earlier this year the World Health Organization (WHO) announced a review of the risks of microplastics in drinking water after an analysis of 259 of the world’s most popular bottled water brands found only 17 were free of microplastics.

Merino says we are only at the tip of the iceberg in understanding the risks.

“There’s no clear data so far on which fish and crustaceans are consuming microplastics or what it does to humans when we consume it,” she says. “We know that plastics are produced with chemicals and those also collect and attract other pollutants.

“What we don’t know is what they are going to do to us, and it is difficult to isolate because humans interact with so many components.”

What is to be done?

Mass production of plastics began around 1950, and has increased exponentially over the intervening years; of the 8.3 billion metric tons that has been produced to date, only 9% of it has been recycled.

On average, plastic takes 400 years to degrade, and many government agencies and not-for-profit organisations are looking for innovations to remove plastics from waterways.

But the principal research scientist at the CSIRO’s Oceans and Atmosphere unit, Dr Denise Hardesty, says she is wary of “silver bullet” fixes.

“We need to look at how to reduce single-use plastics, and approaches to stop or reduce plastic losses into the environment – things such as increased waste infrastructure, incentive programs, and legislative changes,” Hardesty says. “Ultimately, this needs to be a coordinated effort around the world.”

In May this year the European Union has proposed banning plastic products like cotton buds, straws, stirs and balloon sticks to cut marine litter in half for the ten most prominent items.

Lasse Gustavsson, the European executive director of the environmental group Oceana told Time the move was a good one.

“The only way to stop plastics pouring into our oceans is to turn off the flow at its source: production,” Gustavsson said.