Climate change with a cherry on top

Climate change is usually explained in terms of melting ice caps, rising sea levels and coral bleaching. But rising temperatures and altered weather patterns will also affect the food we eat. Recent studies show the cost of putting cherries on your Christmas pudding is likely to increase, that there’ll be fewer prawns for your Australia Day BBQ, and that chocolate might disappear altogether by 2050. 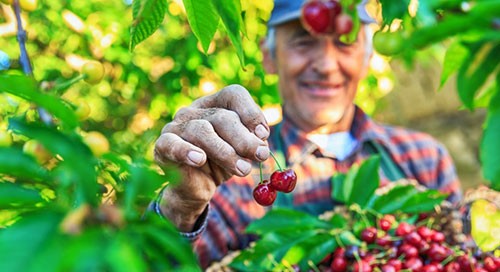 Ben van Delden, agtech sector leader for KPMG Australia says seasonality and the perils of nature’s whim has always had an impact on the price of food; if an unexpected hail storm wipes out a chunk of the cherry crop when demand is high, like at Christmas, you see price rises.

But van Delden says it’s not just about acute changes in supply. Climate Change is likely to force changes to where and how produce is grown with significant growth in alternative food and production methods.

“Warmer temperatures will likely affect fungal infections and diseases hitting plants so a two degree increase will mean moving the key zones for [growing] produce,” he says. “We are also seeing a focus on different ways of producing, such as growing high-value cherries indoors to protect [crops] from the environment and ocean-based plant protein sources.

“In Italy they have started growing plants underwater in submerged bubbles – a smart way of not needing pesticides – while [a project team in] the Netherlands has built a floating dairy farm.

“One start-up in the Netherlands is producing seaweed pasta and bacon that is said to taste remarkably like the real thing, and pea protein is being used as a seafood substitute.

“Who knows what our Christmas lunch will look like in 2030?”

Can we turn back time?

“But practical measures for specific impacts, like shading, pest barriers and other interventions, will continue,” Bell says. “Agribusiness also has the ability to diversify into carbon abatement, as well as plan for and manage the impacts of a changing climate.

“Bloomberg modelling has already shown that on a like-for-like comparison, 100MW of wind power is already cheaper than its coal equivalent.”

What’s climate got to do with the price of fish?

University of Adelaide marine ecologist Professor Ivan Nagelkerken says the world’s oceans are copping a double whammy from climate change; they are becoming more acidic and they’re getting warmer – driving many tropical species toward the poles.

Nagelkerken says with commercially fished species moving to cooler waters, fishermen will burn more fuel and have to cover higher overheads to catch them. And rising acidity is a huge concern for the survivability of species, particularly those we like to eat.

“What we’ve seen so far is survival in species that are flexible in what they eat and naturally aggressive in finding food and shelter,” he says, “but those are not typically species that we fish. If we swap from cod to carp we solve a big problem – but people don’t want to eat carp.”