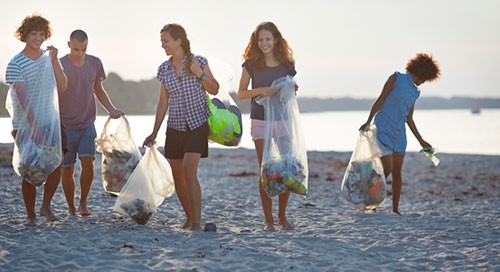 In a world that is producing more than 300 million tonnes of plastic each year, predictions are that by 2050 we’ll have more plastic by weight in our oceans than fish. But this dire forecast is also leading to action, with prominent scientific minds now turning their attention to removing it from the world’s waterways. Here are some of the latest innovations.

Invented by two Australian surfers, the Seabin is a floating rubbish bin located at marinas and commercial ports. Basically, it moves with the tide to collect floating rubbish. The opening sits right at the surface and draws in rubbish that is then collected in a permeable bag.

“These locations are semi-controlled environments with no major ocean storms and with services and maintenance available 24/7,” says co-founder Pete Ceglinski. “The Seabin is more efficient than a marine worker walking around with a scoop net.”

The pump technology also has the potential to collect oils, pollutants, and microplastics floating on the water’s surface.

Dutch wunderkind Boyan Slat founded this project in 2013 at the age of 18. Focusing on the Great Pacific Garbage Patch, located between Hawaii and California, Ocean Cleanup has developed a passive system that concentrates waste and lets ocean forces bring the plastic to kilometres-long floating pipes.

“We see ourselves as a project – we don’t have the ambition or intention to be around forever,” says spokesperson Joost Dubois. “Our approach is with an end in sight. In order to achieve that, humans will have to mitigate the influx of plastic as well.”

Set to launch later this year, Ocean Cleanup estimates it will take half of the plastic in the patch back to shore for recycling in five years.

Environmental warrior, tourist attraction and social media personality, rubbish-collecting vessel “Mr Trash Wheel” has recently celebrated its fourth anniversary of cleaning the waters around the city of Baltimore in the United States.

Using solar power, the water wheel lifts garbage and debris from the water and deposits it into a collection barge for disposal. In its short life, Mr Trash Wheel has collected almost 700,000 kilograms of rubbish, including more than 520,000 plastic bags, 630,000 plastic bottles, 730,000 polystyrene containers, and 930,000 cigarette butts. If laid out in a row, the cigarette butts would extend more than 112 kilometres.

But Professor Ramani Narayan, who specialises in chemical engineering and materials science at Michigan State University in the US, says that while the breakthrough is interesting, it does not address the wider problem of pollution.

“The problem is not the availability of viable and cost-effective technologies to recycle PET [drink bottle plastic] or break it down,” he says. “The fundamental problem is recovery and waste management.”

While technological solutions could radically improve plastic pollution, experts agree that old-fashioned cleanups still have a role. For more than 30 years, the International Coastal Cleanup, has drawn 12 million volunteers from 153 countries who work together to collect thousands of kilograms of rubbish from waterways.

Judie Hansen, organiser of the US state of Oregon’s first coastal cleanup, says this action is as important as ever. “Whether we work alone on a deserted beach or with a small group of our friends, we have the knowledge that we are part of a larger congregation,” Hansen says. “Our statistics join those of others in far-off places we may never get to visit.”

Clean Up Australia Day, while not focused solely on waterways, is a country-wide anti-rubbish effort that also helps rivers and oceans. Almost 600,000 people took part in 2018, picking up about 16,000 tonnes of rubbish.

“Making a real difference starts with looking more closely at our personal purchasing behaviour, becoming conscious of the single use products, packaging and plastics that we buy and then discard,” says Ian Kiernan AO, Chairman and Founder of Clean Up Australia, “We need to continue to challenge our governments to implement effective waste management and recycling programs to reduce the amount of wasted resource that ends up in our precious environment.”